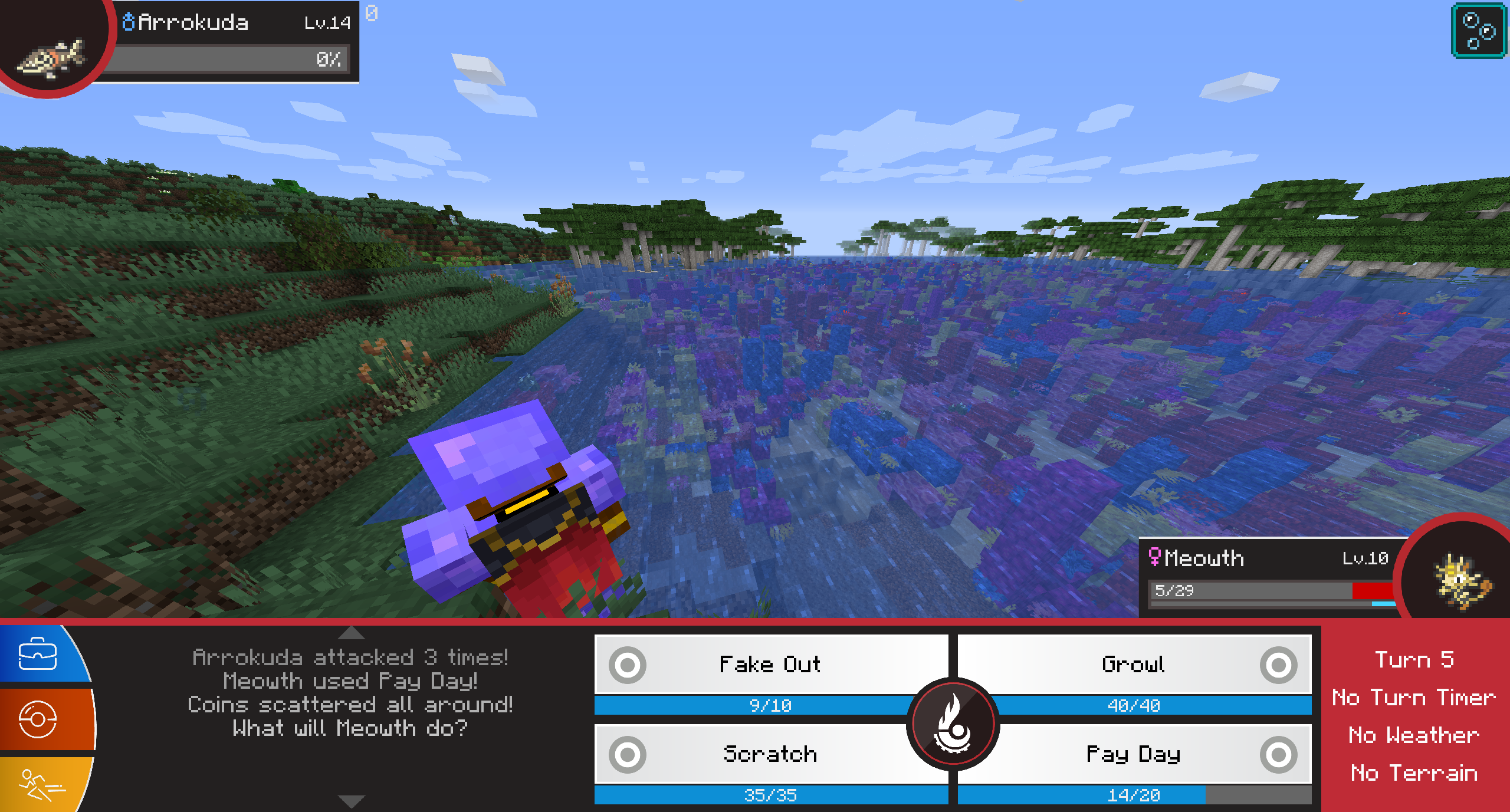 I haven't been able to reproduce this - I tried setting up the same situation shown in your screenshot (A Meowth attacking an Arrokuda with Pay Day) but the Arrokuda fainted when reaching 0% health. Is there a pattern or something else you need to do to make this occur? Additionally, a battle log may be useful here (this can be generated with the new /battlelog command, performed in battle after this occurs).

I saw this occur two times--once with my pokemon (at which point the battle hung and I had to use /endbattle) and once as shown in the image. I didn't notice a pattern so I can't offer any reproduction steps. I'll be sure to collect the battle log if it occurs again. 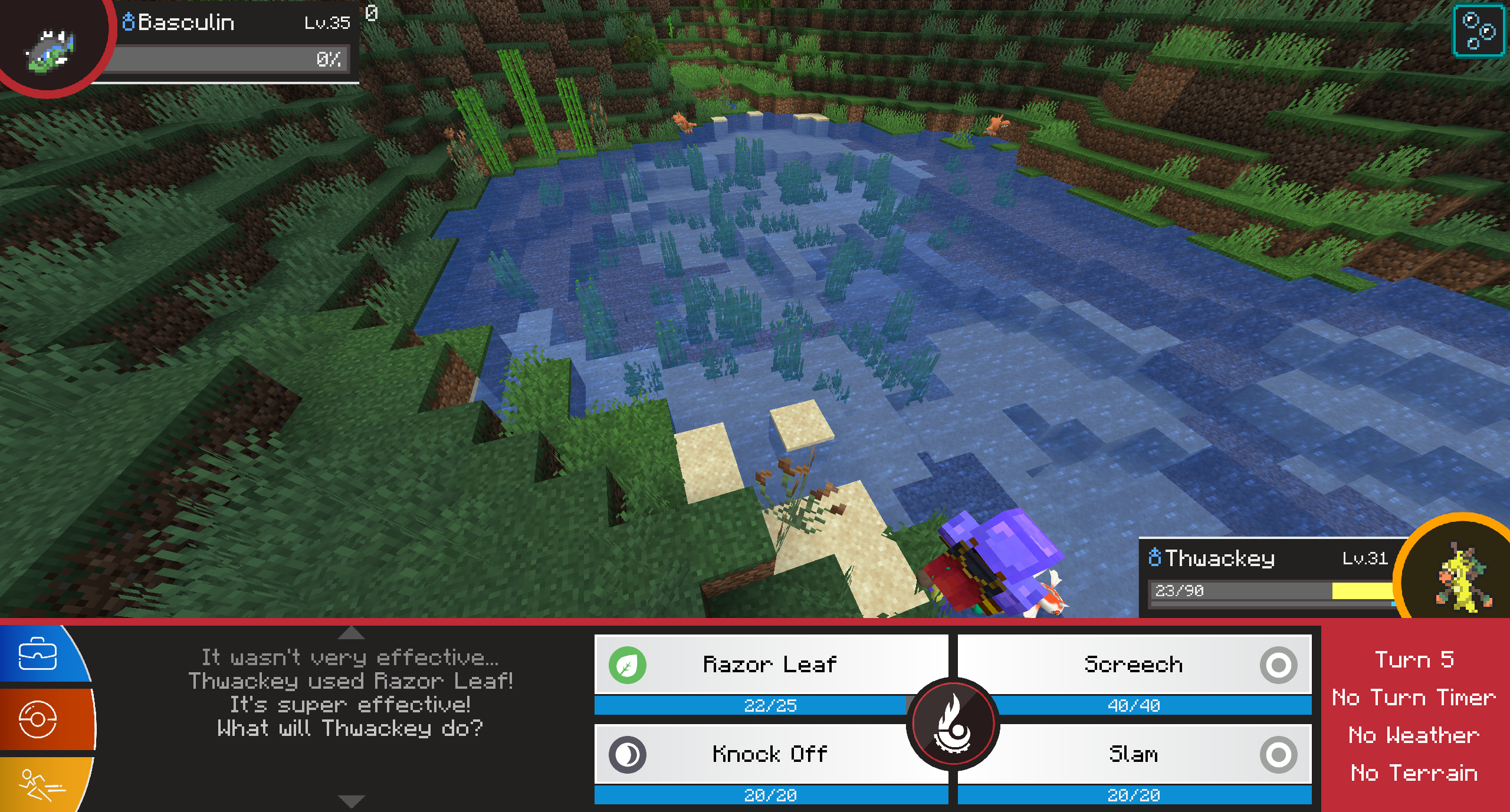 It occurred again. I couldn't get /battlelog because I couldn't type any commands while in battle.

I couldn't kill the pokemon (my attacks did nothing), and after catching it I found it to be at full-hp inside my PC. 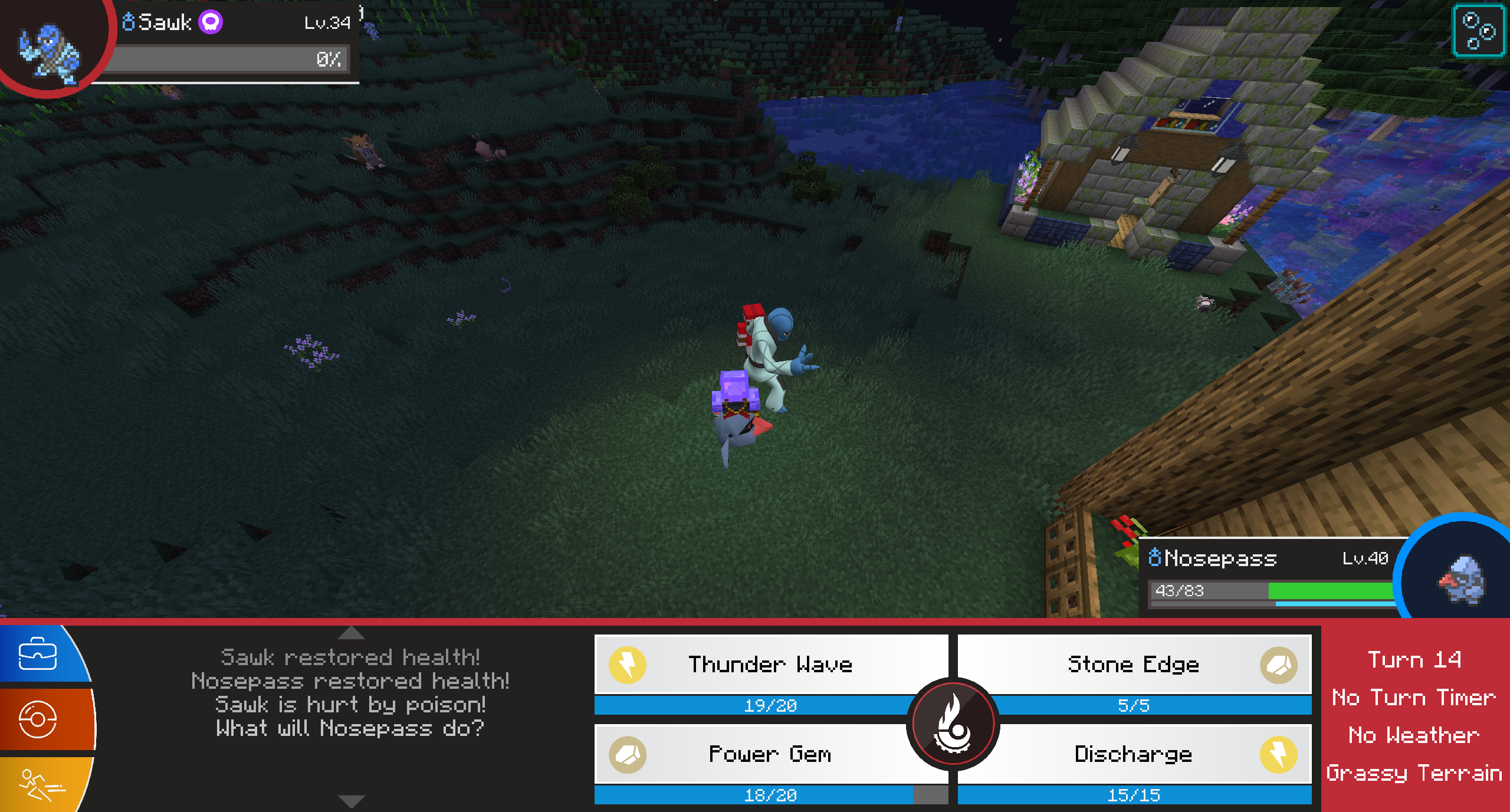 Thanks for these. I've noticed something quite odd in your battle log - several of the moves used in this battle claim their target to be a pokemon which is not currently fighting. I've spent some time attempting to reproduce this issue, but so far only found one way which has been working reliably for me, although somewhat different to what you're doing. I have described my process to reproduce below:

Spawn in a trainer NPC using the NPC editor, give them a level 1 pokemon. Turn 1, poison the target. Then just continually switch until they die from poison damage. Make sure they can use their last move successfully (i.e - you're not immune to the attack or something), but also that none of your pokemon faint in this process. Worth noting that I only switched in my lickilicky on the last turn, yet all of the moves claim Lickylicky as the target. Battle log: https://pastebin.com/nRYvvefz

Of course, this is not the only issue present here, especially given I could only get this to happen reliably against a trainer and not wild pokemon. I would encourage you to share more logs if this has continued to happen, and if possible try to find patterns or ways to reproduce the issue.

I will pass the one reproduction method I found to internal, but further detail would still be appreciated to track down the true source of the issue. Thanks!

Do you know why my logs are only partially captured? How are you supposed to capture the full logs of your battle?

Again this log shows the unusual behavior of targets not matching the pokemon on the field. Would I be correct to assume that the turns up until you used /battlelog were your Persian fighting a Golduck, without switches until you U-turned? The alleged target of all 3 moves the opponent used are a sabeleye, which I'm guessing is the pokemon which switched in from the U-turn?

It would be nice if the battle logs gave more detail, but this looks to have recorded all the data it is supposed to - were you expecting there to be more in this battle log? If there were more turns - it records up until the point in battle you run the command, so you'd just need to run it later.

Changes were made in 9.1.1 which should resolve this issue. I am no longer able to reproduce it, if you can then please let me know.

Which version of Pixelmon are you playing? In the […]

There's not much to say about it other than that i[…]