Kanto Region! Built For RPG/Server Use!

Welcome to my first thread on the pixelmon forums! I am hoping to make a big contributions to the Pixelmon community!


My first project will be a remake of the Kanto region, But it will be modified slightly to suit the 3D environment of Minecraft and also to suit the needs or using this map on a multiplier server. By that I mean the buildings and environment will be designed to look good, not to create the exact same 2/basic color scheme that they had in the original game. But while doing that we are keeping true to the theme/feel or the original game.

This map is being built by the HaydzCraft build team, Which was created during a creative/building competition on my youtube channel: [youtube]https://www.youtube.com/user/HaydzProductionz/youtube]


Ours plans are fairly simple, We are using this map for the scaling to amke sure the routes/towns are the proportionate to each other:

Then we are using this map to help define the depth/height of the land: 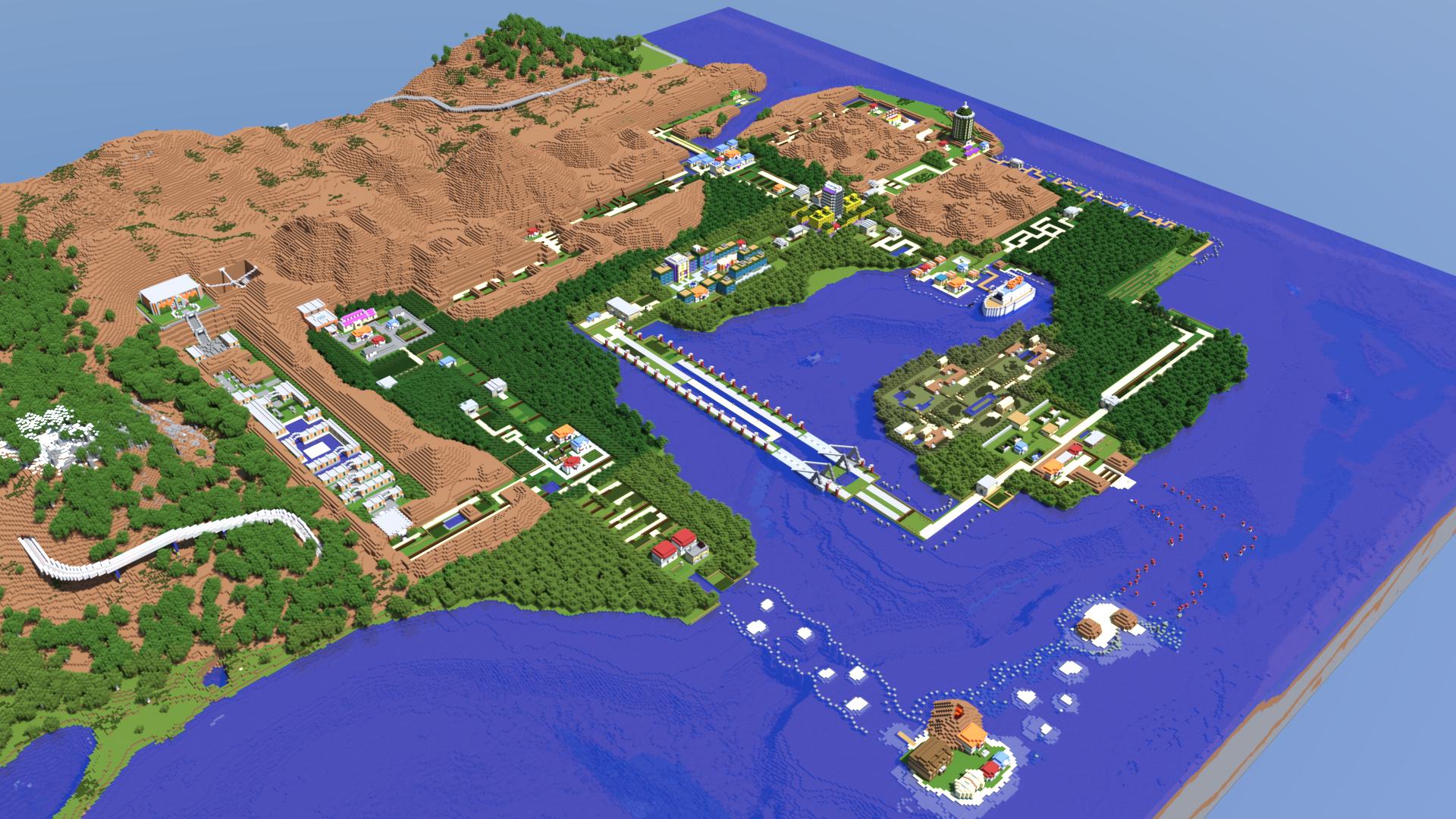 Overall we are about 30% Done so far, and always looking for professional builders to get involved. So if you interested feel free to get in contact with me! Also once a bit more progress is done the server will be released on a Pixelmon RPG server at poke.haydzcraft.com which I will be starting a youtube series on SireSolo wrote:Nice... Just wondering, will this be 100% to scale, like mine, or not like countless others? will you be utilizing custom npc for every person in Fire Red, or random people or non at all? any other mods will you be using in conjunction to this, like I am, or no?

Yea exactly, This build will be nothing like the others. Personally I was looking around and all the remakes were all just exactly replicas of the game/anime, Which weren't really built to look good or include the things needed for a multiplayer server to run smoothly (Better equipt gyms, multiple floors, Spawn area for signs ect) ideal for a multiplayer server experience. While this project will be staying true to the total overall scale of the map/towns/routes they will be approx 3x bigger then in the game. And everything is built to look as good as possible/re-positioned for more space instead of just coping directly from the game.

For example, Pallot town has 3 houses and spawn point with signs, The houses look nothing like the game and are different sized depending on what needs to be in them. But the insides still represent what they houses were used for in game. With the plugins/mods side of things I am still working on getting in contact some someone who is experienced at editing pixelmon for me. But I have a bunch of Java devs who are going to be working all the little plugins I need to make it run smoothly.

If any of the pixelmon devs read this and want to help out, Of course this position is a paid job. And if you help me out I will return the favor

Check out my map, Pixelmon Water Blue... It's a step for step exact replica of the game...

I believe it quite a good scale, It is quite a look bigger then all the 1:1 scale maps built. But I believe everyone will like it when they join.
[center]Epic RPG Pixelmon Server! With Custom Kanto Region! Join Now At Pixelmon.net[/center]

Megogleplex wrote:I don't know how far along this is as of current, but i'm pretty good at building so if you need another builder I can help.

Have you got any previous work you can link me? or proof of your skill? Thanks
[center]Epic RPG Pixelmon Server! With Custom Kanto Region! Join Now At Pixelmon.net[/center]

In his hunger games 130, he announced that he would like some builders to make him some survival games maps for his server set. He said that he would look at any map, but one that he though would be really cool would be a Summer Ski Resort. Since after three months, no one had built it, I took it upon myself to build it. There isn't much work done on this map, as the mountain took one hell of a long time to build

Here, we have the mountain. This was the main thing Bajan asked for on his map, so it was the first thing I built. And let me tell you, I hope none of the future builders out there try to make mountains without world edit. FML. I built this mountain by hand, and it took forever. The dome on this map is the only thing throughout all of the maps that I used WE for, as I believe it is more impressive f you build it by hand. Domes are near impossible to build by hand, so I installed it just to do that.

Another angle of the mountain, this time showing the stream that goes down the other side:

An Up close image of the peak of the mountain, this one shows a box like part of the mountain. This box holds something called King Nooch's Crown. It is a golden crown with protection 3 on it, and it will only be open if you shoot a button outside of the map.

Its not easy to see, but next to my cursor, there is a button. Shoot that button with an arrow, and the crown will be revealed.

Here, you can see the open piston, with a hopper inside. The hopper holds the crown.

Next up, I have the spawn for the map. Every generic survival games has a spawn point. This one is a nice cozy lodge-like place, Its got fireplaces, carpets, and a bunch of chests for the survival games. Here are two angles that allows you to see the upper and lower level of spawn:

And the last two images for Survival Games - Summer Ski Resort, are the images of the parking lot on the outskirts of the map. This is what I am building right now, so there isn't much but a bus, so I have an outside view of the bus, as well as an inside one.

The next map of mine I will show you is another survival games map, this one being based on The Legend Of Zelda - Link to the past. This is probably my favorite out of all the maps, as it is just so massive - or at least will be. Please keep in mind, that I do this all by hand, without the use of WE.

This is the main area of the desert:

And here is an overall view:

In the top left of the previous picture, you can see one of four lava holes on the hill. Jumping inside of that hole will bring you to an underground cave with some good loot.

Also on the overview map, you can see a mountain-like pillar stickng out of the ground, with a small hole on top, located almost directly in the center of the image. Inside of that mountain, there are some chests, but they are tricky to get to due to lava and cactus:

Because it is a survival games map, I did not have enough space to include the entire temple, so instead, I left an enchant golden axe with sharpness 2, unbreaking 3 on it:

And finally, on the outskirts of the desert area, there is a small grassy hill with a house next to it:

There is one more zelda map I have made, however this one was not designed to be a survival games map. This map was designed for people to walk around and experiance the OoT world in minecraft. I give you, Ocarina of Time.
This map consists of just the basic Kokiri village, so there isn't much to show, but I am impressed with this map myself. P.S. The trees face looks like crap as of current, so please don't judge the outer tree too much.

Here, we have an overview of the kokiri village. Its very small, but I feel like I have done a good job on what I have so far:

In the game, you must crawl through a small space to enter an area, in which you will recieve your first sword. This is that area, and the chest at the end actually has the kokiri sword inside of it:

This is the spawn of the map. It is where you wake up in the game, and it it just a small room with a bed inside. Nothing much, but I figured I might as well show it:

This is the lake of the village, where the town shop rests. I like this lake, so I showed it:

Alright. Please don't judge the face. *Sniffle* This is the outer tree.

It is kind of hard to see in the next few pictures, as it is very dark in the Great Deku tree, but they are all just showcasing the inside. If you were to jump into the lava in the middle, it would take you to the rest of the dungeon. The second image also shows where you are normally suppossed to jump to get into the center proporley, but since you can just go from the ground in this version, its just for Decoration.

The next map is simple, it is a parkour race that I created, which has 20 sections total. I only show 8 however, because this isn't a true reflection of what I can build, I just though I would show it.

Well, thats all I have to show. I had three other maps I could have shown (An adventure map, A paintball map, and another parkour map), and a Mega Blocks map where I took a bunch of minecraft blocks and made every pixil one block, but I lost the save for Mega blocks and the other three just weren't worth showing for this purpose.

As for your map, I know that you are making it for multiplayer servers, but what if there was a downloadable version of an adventure map? With a map as big as you are building,I could help turn it into an adventure map if you wanted, because that would be really cool. Anyways, my minecraft name is "megogleplex" if you want to whitelist me so we can build, but other then that, if you have skype I could add you, and I hope you accept me as a builder. Peace Out!


P.S. I hope you see how badly I want to do this, taking pictures like crazy.
Reply