Didnt they fix that a long time ago

Didnt they fix that a long time ago

Sup3rp1gm4n wrote:Maybe add the glitch to it, when you catch MissingNo, your mc will crash xD

Catching missingno. only results in choppy battle sprites until you look at the summary of a non-glitched pokemon 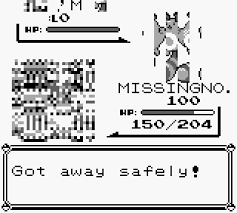 Kinda like this but not with fake sentret sprite.

It would be awesome if Missingno. was a boss. When it appeared and you challenged it, you're taken to some kind of weird distorted glitchy-looking dimension where you have an epic boss battle against it. If you lose, the game crashes. If you win, then you get a cool prize- but you can't catch it. Whether it appears or not, it shouldn't be possible to catch it.
"Owbguins cant fly." -SPG 2014

Judging by how the orbs use a damage value to keep[…]

For people who play singleplayer, they don't have […]

If anything the new system should be faster and re[…]