Also, maybe the black lines should be a little paler so it isn't too cartoonish.
Proud of being the 47th member !

Blaster wrote:Here is an algorithm that I calculated to find out when a mod will be released

Foquine wrote:This Graveler is awesome! But are those arms done so they would be movable?

Also, maybe the black lines should be a little paler so it isn't too cartoonish.

Both sets of arms could be animated if someone has the patience. The lower arms are just in that position in case they don't need to be animated.

I'm definitely going to add more bumps based on feedback, but i'll probably keep the black outlines as they are. I'll try making them more pale to see if it works, but they're there to prevent those areas from just blending in with the rest of the model and getting lost in it all.

Haunts wrote:Best thing I've seen since butter on toast, but my only complaint is, the color seems off, in the sprites and later anime, it's depicted as a grey similar to geodudes, It's shiny however looks like it's made of mud, so if this was put into tha game as is, it would look very similar to it's eventual shiny form.

With the color there are definitely two very different shades in the pictures I looked at. The current color is based off images like this: 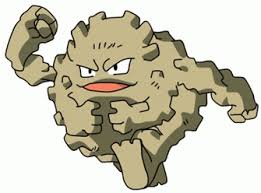 I think I'll try changing it to grey though to see if you guys like that better.

I knew you had based it off of the earlier ones, but it really doesn't matter, it might just be my preference, and just asking, how long did this take you? a year?
I try to be friendly as can be, so yah. and I'm Antisocial and don't trust people so no skype. please don't ask

I knew you had based it off of the earlier ones, but it really doesn't matter, it might just be my preference, and just asking, how long did this take you? a year?

No no not that long at all. From start to finish about 5 days. I had a lot of help with feedback from people like SPG and Skibb during that time though so it made the process move along much more quickly.

smegskull wrote:what about mixing the colours so the arms are slightly tan but the body is grey?

SPG wrote:this doesnt feel like your slandered of quality

I suppose this mechanic could also allow adding a […]

I personally think that Megas, Z-moves, Dynamax, a[…]

Apart from the Ultra Necrozma battle, there aren't[…]

I think a way to encourage bug reports is by provi[…]

Alternate ways to fix this: Make it so you rema[…]

Wanting to bump this. Location based evolution or […]

The server is amazing and fun for anyone who wants[…]

I think that the Drowned World should get their ow[…]

I think that the Drowned World should get their ow[…]

I don't know if the snowy taiga mountains even exi[…]

While the Hex Maniac may already be a chatting NPC[…]

If it works differently than in a regular battle, […]

Someone in the Honedge line should drop a sword. E[…]

There are five forms of MissingNo, and each one of[…]