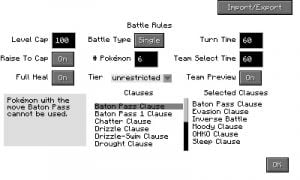 The screen displayed when battle rules for an NPC Trainer

Battle rules are restrictions that can be placed on a battle. They are negotiated and selected prior to the battle, and remain in place throughout the battle. Both player-vs.-player and player-vs.-NPC Trainer battles can have battle rules configured. Battle rules can also be exported and imported as plain text to save rule configurations for later use.

If battle rules are configured, players will be taken to a "team selection" screen prior to battle, where they can choose which of their party Pokémon will be used during the battle, along with which Pokémon will be sent out first as the battle begins. Pokémon that are not selected for battle will become temporarily unavailable during battle, and will return after the battle is finished.

Using an NPC editor, the battle rules for an NPC Trainer can be selected. These rules will be enforced when a player battles the NPC Trainer, and are non-negotiable.

Clauses are assorted rules that restrict Pokémon that can be used or affect certain aspects of battle. If clauses are selected such that a side of the battle cannot use any of its Pokémon, the battle will not start. All clauses are disabled by default, and they can be selectively enabled as desired.