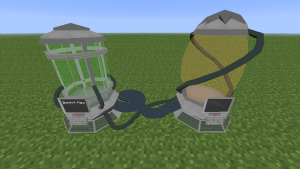 A cloning machine is a machine that can be used to extract DNA from Mew to form Mewtwo. However, the experiment will sometimes fail and only produce a Ditto. It is made with a green tank, orange tank, and cloner cord. It is possible to break and retrieve a cloning machine by hand, but a pickaxe will speed up the process.

In order to produce a Mewtwo, a Mew must first be placed in the machine by right-clicking the machine with a Mew in the player's party. Afterwards, any combination of three blocks of diamond, gold, or iron must be inserted into the machine. Higher quality blocks will increase the chance of producing a Mewtwo instead of a Ditto.

The three types of blocks are each worth different values in the cloning machine.

Once three blocks are placed in the cloning machine, a Mewtwo or a Ditto will be created in the machine after a few seconds

Either way, Mew will return to the player's party after the cloned Pokémon exits the machine.

Each Mew can only be used with a cloning machine three times.