One of the most common issues encountered when installing Pixelmon is Minecraft running out of memory. Pixelmon has many large assets such as models, textures, and sounds, that require significantly more memory to load compared to vanilla Minecraft and many other mods. Not having enough memory will generally cause Minecraft to crash or freeze while loading, though it can also manifest as persistent stutter.

Memory issues are not the only cause of Minecraft not loading, though the issues listed below are often related to insufficient allocated memory.

The first part of a Minecraft crash report. The highlighted area indicates that Minecraft has run out of memory.

If the crash begins with any of these lines, then Minecraft is likely crashing because it ran out of memory. 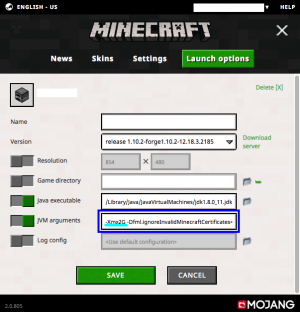 The vanilla JVM arguments section, with the -Xmx2G argument underlined.

To improve performance and stability in a modded setup, more memory must be allocated to Minecraft. (at least 2GB)

If you cannot increase memory above 1GB or the game now crashes, see this section.

If Minecraft does not successfully start up after changing the allocation, there are several possible causes.

On the Technic launcher, you will not be able to allocate more than 1GB of RAM if you are using a 32-bit Java version. The AT Launcher will throw an error when being installed in a 32 bit environment.

You can download 64 bit installers for Java here. Make sure to choose a version that is labeled as 64 bit, as any unlabeled installers will still be 32 bit.

If you are using Windows and are unable to install a 64-bit Java version, it is possible that your operating system is 32 bit and cannot run 64 bit programs. Be warned that upgrading Windows from 32-bit to 64-bit is not a trivial task. If you are willing to upgrade, see one of the following links depending on the version of Windows you are using:

If you cannot upgrade to a 64 bit operating system, it is possible that your computer's processor only supports 32 bit operation. In this case, you will need to get a new computer with a 64 bit processor.

The amount of memory installed on a Windows 7 machine. This system does not have enough memory to run Pixelmon.

If you've already installed a 64 bit Java version and are still getting the same errors as before, your computer may not have enough memory to run Pixelmon.

You can check the amount of memory installed on your system by right-clicking "Computer" (Windows 7/8) or "This PC" (Windows 10) and choosing "Properties". Look for the "Installed memory (RAM)" entry under "System". If there is 2GB or less installed, you will need to add more memory to your computer in order to run Pixelmon.

Should you want to buy and install more memory, the process is explained in detail here.

Windows systems may have specific settings set that will limit the amount of memory that can be allocated to a Java program. Frequently, this limit is less than 2GB of memory and will override any manually-defined JVM arguments, causing too little memory to be allocated to Minecraft.

To check if this limit is affecting you, look at the "System Details" section of the Minecraft crash report, find the line that starts with "JVM Flags", and look for -Xmx in this line. If you see multiple -Xmx arguments, including one that is not in the "JVM Arguments" text box in your Minecraft profile, the global Java limit is preventing you from allocating enough memory.

The following snippet is an example of the JVM flags that are displayed in a crash report when the global Java limit problem occurs. Notice that there is a user-defined -Xmx2G and an additional -Xmx512M that the user did not manually add.