An NPC editor is an item that is used to create and edit various types of NPCs (NPC Trainers, traders, chatting NPCs, move relearners, and move tutors). Its inventory sprite resembles Minecraft's Steve.

When used on the ground, it will present a choice of which type of NPC to create. When used on an existing NPC (except for a move relearner), it will open a GUI where the NPC can be edited or deleted. NPC editors can only be used by players in Creative mode.

On a Sponge server with a permissions plugin, the "pixelmon.npceditor.use" permission node is required to use an NPC editor.

With an NPC editor, NPC Trainers can be customized in the following ways: 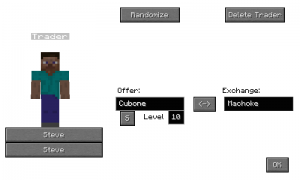 Traders can be customized in the following ways:

It is also possible to randomize the Pokémon that are offered and requested by the trader. 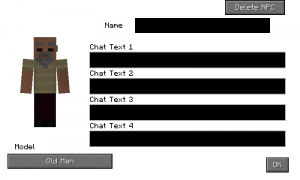 A chatting NPC can be customized in the following ways: 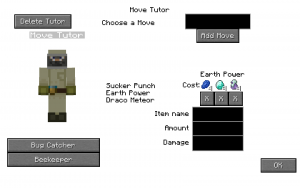 A move tutor can be customized in the following ways:

Doctors can be spawned with an NPC editor, but they cannot be customized. They can be despawned by left-clicking them with the NPC editor. 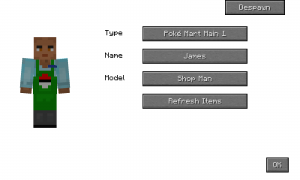 Shopkeepers may be spawned, edited, and despawned with an NPC editor. The shopkeeper type, name, and model can be edited from this interface. The "Refresh Items" button can be used to reload a shopkeeper's stock after changing its type; otherwise, the stock will not change until the beginning of a new Minecraft day.

In order to edit shopkeepers further (e.g., the items they stock), their JSON files must be edited; details about doing this can be found here.

The skins of Trainers, traders, and tutors can be customized to be multiple built-in skins. External skins can also be used by selecting the "Steve" option, causing a second button to appear with more customization options.

All of the skins below are labeled by their in-game names, with their file names (used in places such as custom resource pack setting and external JSON files) in parentheses.

Chatting NPCs have customizable skins, but the possible skins to choose from are different from other NPCs.

Certain Gyms have Gym Leaders with special skins that are not encountered by default on any other NPCs.

These skins are not used by any NPCs by default, but are accessible by file name using one of the aforementioned methods.