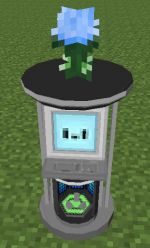 A ranch block is a block that is required to breed Pokémon. Unlike daycares in the Pokémon games, Pokémon do not gain experience while inside a ranch block.

A redstone current will be emitted by a ranch block that has an Egg inside of it.

A ranch block requires a pickaxe to be broken and retrieved. Breaking it will reset any progress that was made with the breeding process. Any Pokémon that were inside the ranch block will be returned to the PC.