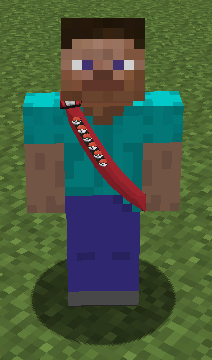 This article is about the sash accessory worn by players. For the Focus Sash held item, see this page.

A sash is an accessory that can be worn by a player. There are multiple types of sashes, available to different groups of people.

Donations do not have to be single transactions to count towards a sash; multiple donations from the same Pixelmon account will be added together to see if a player qualifies for a sash.

If you are a nitro booster on the Main Pixelmon Discord, you can redeem your special nitro booster's sash (toggleable with the donation sash).

Like capes, the sash is not an in-game item. After fulfilling the requirements for obtaining a sash and waiting for a few minutes, the sash will automatically be equipped when the player joins a Minecraft world or uses the /redeem command. Once the player has a sash, its visibility can be toggled with the /redeem toggle sash command.