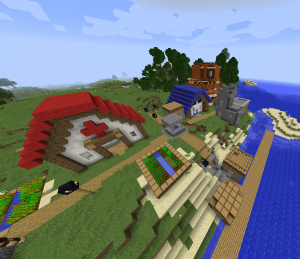 A town is a village with Pixelmon NPCs inhabiting it. Most towns also contain a Pokémon Center and a Poké Mart.

Occasionally, NPC Trainers also spawn in towns. They can be any type of NPC Trainer, regardless of the biome that the town is in.

A town also usually has a Poké Mart, and is the only place where Poké Marts spawn naturally. Each Poké Mart contains two shopkeepers who sell various Pixelmon-related items in exchange for PokéDollars.

Gyms can spawn near (but not inside) towns.

All other structures (houses, farms) within a town are unchanged from vanilla Minecraft.