To enter Ultra Space, a player must either find a naturally spawned Ultra Wormhole or obtain the Pokémon Arceus, Solgaleo, Lunala, Necrozma, or Palkia. 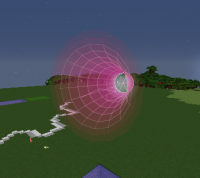 If the player finds a naturally spawned Ultra Wormhole, they will be able to mount a flying Pokémon or build-up to the portal and enter it. When the player enters the portal, they will automatically be teleported to the Ultra Space Dimension.

If a player instead finds any of the Pokémon Arceus, Solgaleo, Lunala, Necrozma, or Palkia they can then use the external move Spawn Portal, which will create a portal in the sky from where it was activated. This portal can then be accessed the same way that a naturally spawned portal can be entered, however, this process can be redone after the external move cooldown has finished.

The Ultra Space dimension is much different than the overworld and in some ways takes a likeness to The End. It is full of floating islands of many vanilla biomes, as well as new biomes unique to the dimension. While inside the dimension, the player will find that while they can mount their Pokémon and use elytra, activating either of these will send the player soaring high into the air. Instead, the player should look to travel on foot. The dimension also seems to lower gravity meaning you jump higher as well, to complement this you also take less fall damage than normal.

The dimension itself has a sky that will slowly change colors over time. It also contains fog that can impair the user's ability to see far, but this hindrance can be reduced if the player were to equip Safety Goggles in their helmet slot. 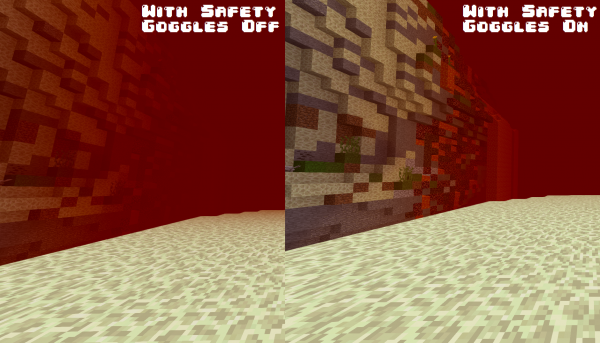 A visibility comparison from wearing Safety Goggles in the Ultra Space Dimension.

While exploring Ultra Space, players can expect to find many other dimension features, as well as new ones. Players can find Nether Strongholds with chests, as well as End Cities and ships high above the world. Be careful around Shulkers however, since the Levitation effect from projectiles combined with low gravity will launch you high into the air, and subsequent shots can leave you slowly falling to your death or launched too high into the skybox where the game will little away at your health. The world generation also creates new biomes, Ultra Deep Sea, Ultra Desert, Ultra Forest, and Ultra Jungle. The Ultra Deep Sea, for example, is full of obsidian tendrils and spheres that cover the land and can also contain diamond and lapis blocks on them.

Furthermore, while exploring this dimension, players can come across Beast Chests that contains many items of loot, such as Beast Balls.

Finally, Hidden Ability Pokémon and Shiny Pokémon have twice the chance to spawn in Ultra Space.

The ten Ultra Beasts are only obtainable via Ultra Space. These ten are:

There are three ways to exit Ultra Space. The first method involves finding another Ultra Wormhole that has a chance to spawn while the player explores Ultra Space. The second method involves having Arceus, Solgaleo, Lunala, Necrozma, or Palkia and using the external move Spawn Portal to create an exit portal. Finally, a player can leave Ultra Space by jumping into the void below. This will not kill the player and will instead teleport them back to the overworld.

Whichever way the player decides to use to exit Ultra Space, no matter how far they had explored, they will be returned to the same area that they entered Ultra Space from.