As of Pixelmon 8.4.0 this is now included in Pixelmon! Nothing further is needed to get started.

Pixelmon TCG adds various items and blocks to the game in order to facilitate the collecting of, trading of, and playing of the Pokémon TCG within Pixelmon.

Upon first joining a server, a player will not yet have any cards. In order to get started, booster packs can be bought with PokéDollars from a shopkeeper within a town, or created with essence.

Essence is dropped from wild Pokémon after knockout. The amount and type of essence dropped is relative to their level and types. On average, a level 50 Pokémon will drop 100 essence, but it is possible for them to drop way more than this. Legendries drop over ten times the normal amount of essence. Raids also drop essence as well! 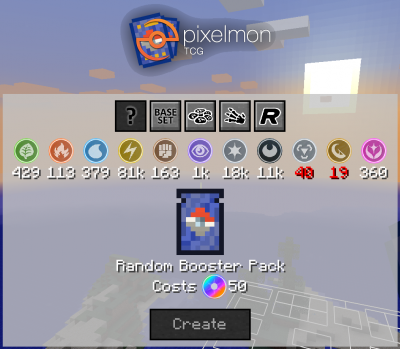 Cards can be stored in a

Deck holder or a

A battle can be started by using a

PixelmonTCG BattleBox while holding a valid card deck (more details in the TCG official rulebook) which will be used in the battle. There are three different sizes of the BattleBox, by default these do not have recipes as it's for the server using this to decide how they will be distributed.

Battle rules are the same as in the official Pokémon Trading Card Game of the current implemented sets.

Below are current limitations of TCG battles:

Below are the crafting recipes currently found in Pixelmon TCG:

The commands have been made to be tab completable, this is especially helpful for the give command.

The mod must be installed both server-side and client-side to be used.