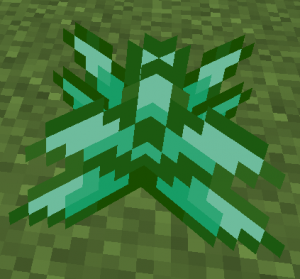 Pixelmon grass is a block that acts like tall grass in the Pokémon games, causing wild Pokémon to spawn and initiate battles with players that step into the grass. The Pokémon found in Pixelmon grass are the same Pokémon that can normally spawn in the biome that the grass is in. If the wild Pokémon is not captured or defeated at the end of the battle, it will despawn. Pixelmon grass can be picked up with shears after having been placed.

Pixelmon grass cannot be obtained legitimately, and must be spawned in.