A Pokémon editor is an item that allows players to edit their own and other people's Pokémon parties. It can only be obtained by spawning it in.

The Pokémon editor allows the following aspects of Pokémon to be changed. 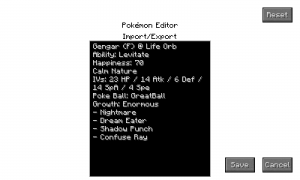 In addition to editing Pokémon, the Pokémon editor can export a Pokémon party or an individual Pokémon as text. This text can be saved in an external file (using standard text editor functions like select all, copy, and paste) and re-imported later. The NPC editor uses the same text format for importing/exporting NPC Trainer Pokémon, and thus exported text can be used interchangeably between the two editors.